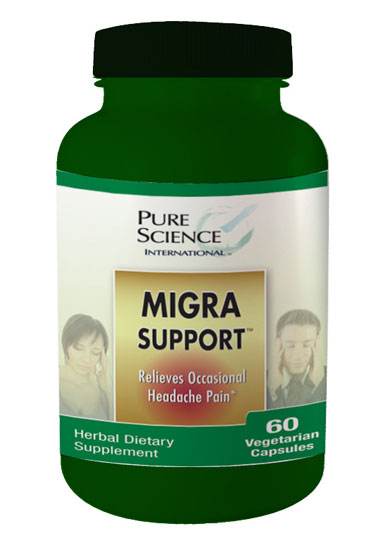 Living with the torment of chronic migraine headaches affects your work, your relationships, and your life?

If other remedies aren’t working for you or cause unpleasant side effects, it’s time to consider MIGRA-SUPPORT™.

MIGRA-SUPPORT™ is an all-natural herbal dietary supplement clinically tested on people who suffer chronic migraines. The results were dramatic…within 24 days after starting daily doses of MIGRA-SUPPORT™, 100% of the test subjects reported being migraine-free!

85% of participants reported COMPLETE relief within 90 minutes after taking Migra-Support™ after migraine onset.

100% of migraines were ELIMINATED within 24 days after beginning daily use of Migra-Support™ as a preventative measure.

Get Relief for the Pain…Fast!

In the clinical study, those who took  MIGRA-SUPPORT™ reported fast, dramatic relief.

Even more striking, when those suffering chronic migraines took two MIGRA-SUPPORT™ capsules a day as a preventative step... 100% became migraine-free!

The MIGRA-SUPPORT™ formulation is composed of five herbal extracts (Juniper, Goldenrod, Dandelion, Meadowsweet, And Willow Bark) balanced for ideal synergistic action and then conjugated to naturally occurring fruit extracts.  The conjugated complexes act as carriers for the pain-fighting herbal compounds.  When consumed, the fruit extract component of the herbal-sugar complex acts as a shield for the herbal component.  The whole complex quickly passes through the intestinal wall and into the bloodstream, where it separates and the herbal component is released with all of its potency intact.  Fragmentation by digestive enzymes and subsequent neutralization by the liver are thus avoided.

MIGRA-SUPPORT™ targets some of the pain receptors that sense and send pain signals to the brain.  Some types of headache can be caused by tissues that have become over-sensitive to chemicals that normally circulate in the blood.  Things you eat or smell can cause the release of extra amounts of these naturally occurring chemicals.

The herbal extracts in MIGRA-SUPPORT™ have been used for many thousands of years in cultures around the world and contain compounds that have been determined to fight different aspects of these uncomfortable sensations.  The MIGRA-SUPPORT™ formula includes a balanced ratio of the herbs Juniper, Willow Bark, Goldenrod, Dandelion, and Meadowsweet.  These herbs mount an attack to stop your occasional symptoms.  Together, they:

* These statements have not been evaluated by the Food and Drug Administration. This product is not intended to diagnose, treat, cure or prevent any disease.